Top Ten Tuesday is a weekly meme hosted by The Broke and Bookish.
This week the girls want to know my
Ten Authors I Own The Most Books From

Well, this week's topic was really interesting. I knew I had some authors I had a lot of books from and others I own one or two but I never thought that I had two authors I own more than 10 books from.

Terry Pratchett
I own 51 of his books. Yes, he is my number 1! I own 39 of his 40 Discworld novels, some other books by him and two of my favorite Discworld books in the beautiful cloth bound edition.
Janet Evanovich
Janet's books are some of my all time favorites. I own all of her Stephanie Plum novels, her in between number books, her new series with Lee Goldberg and one of her romance novels - 28 books in total.
Jenn McKinley
Jenn McKinley writes cozy mysteries - as many authors on this list - and I own 9 of her books.
Anne George
She was the author of the Southern Sisters mystery novels and sadly died many years ago. I own all of her 8 Southern Sisters books and they are regular re-reads for me.
Cleo Coyle
Cleo Coyle also writes cozy mysteries about Clare, a New Yorker coffeeshop owner. I really like these books and own 10 of them with hopefully more to come.
JoAnna Carl
JoAnna's books are settled in a small town and tell the story of chocolate shop co-owner Lee. Did you see that she has a chocolate shop? I was sold! I own 10 of her books.
Lorna Barrett
My last cozy mystery writer on this list - I promise. Lorna Barrett's novels tell the story of a bookshop owner specializing in crime novel and I currently own 6 of her books.
Jill Shalvis
I adore the Lucky Harbor series and currently own 10 books of this series with hopefully more to add. They are not that easy to find in Austria but if I can't find them a week after release I usually order them online.
Cassandra Clare
Who doesn't own all of her Mortal Instruments and Infernal Devices novels? I do! So 9 books in total.
Ally Carter
At the end of last year I did a huge Ally Carter marathon. I read all 6 Gallagher Girls books in a bit more than a week and read the first 2 Heist Society novels and Double Crossed (novella) shortly after. I still need to read Perfect Scoundrel but I'm sure it won't take me long to do just that. I own 10 books by Ally.
Posted by Karin at 12:00 AM 3 comments:

The Write On review-a-thon is a monthly event created and hosted by Brianna at The Book Vixen. It’s 2 days dedicated to getting reviews done, whether you have one review to write or 30+. This edition of the review-a-thon takes place all day Saturday, July 26th and Sunday, July 27th. Let’s get those reviews done! Follow us on Facebook and Twitter for updates.

For future Write On review-a-thon dates check the schedule.

I currently am 12 reviews behind and I really need to catch up on them before I forget what I want to say. So this weekend I will (finally) dedicate some time towards writing and scheduling them. Let's see how well I am doing.

Email ThisBlogThis!Share to TwitterShare to FacebookShare to Pinterest
Labels: ...on the blog


Most von Lipwig (Going Postal, Making Money, Raising Steam by Terry Pratchett) because he is the best when it comes to convincing people. So if we encounter an indigenous tribe or a travelling merchant he will get us whatever we want.

Finley Jayne (Steampunk Chronicles by Kady Cross) because she is not only really nice but also super strong. If we want to build a house or something along these lines, her skills would definitely come in handy.

Ramos (Shelby Nichols Series by Colleen Helme) because he is the loyal bad guy. He is a hit man but has a soft spot and always has your back.

Darcy McCall (Breakfast at Darcy’s by Ali McNamara) because she knows what it takes to settle on a remote island and because I’m sure we would become good friends really easily.

Nick Fox (The Heist, The Chase by Janet Evanovich and Lee Goldberg) because it’s always good to have a con man on board, right?

Cammie Morgan (Gallagher Girls Series by Ally Carter) because being a spy might be helpful. If there’s no way that we can flee from this deserted island we will at least have some cool gadgets and secret hiding places.

W. W. Hale the Fifth (Heist Society Novels by Ally Carter) because he’s not only really cute and a good and loyal friend but also member of a group of thieves. I can sense a theme here.

Xemerius (Precious Stone Trilogy by Kerstin Gier) because he is such a great character. He is a demon gargoyle who is really witty and funny and super loyal to his friends. He is just awesome and I would love to have him with me when I’m stranded on a deserted island.

Jax Cullen (Simply Irresistible by Jill Shalvis) because he’s hot and a carpenter. I’m sure he’ll come in handy.

Chet (Chet and Bernie Mysteries by Spencer Quinn) because if I cannot take my dog with me I would love to have Chet as my trusted sidekick. He is clever and observant - a loyal dog and there is nothing better than sitting on the beach, cuddling with your dog and watch his case the waves.

Review
The Future of Us
by Jay Asher and Carolyn Mackler 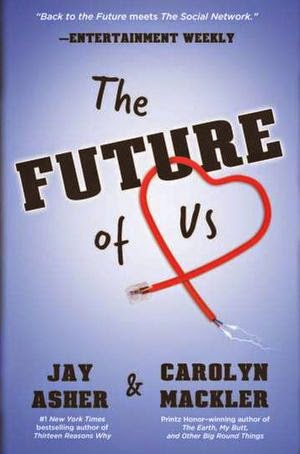 First sentences:
Emma:
I can’t break up with Graham today, even though I told my friends I’d do it the next time I saw him.

Summary:
It's 1996, and Josh and Emma have been neighbors their whole lives. They've been best friends almost as long - at least, up until last November, when Josh did something that changed everything. Things have been weird between them ever since, but when Josh's family gets a free AOL CD in the mail, his mom makes him bring it over so that Emma can install it on her new computer. When they sign on, they're automatically logged onto their Facebook pages. But Facebook hasn't been invented yet. And they're looking at themselves fifteen years in the future.

By refreshing their pages, they learn that making different decisions now will affect the outcome of their lives later. And as they grapple with the ups and downs of what their futures hold, they're forced to confront what they're doing right - and wrong - in the present.
source: Goodreads

My opinion:
I was intrigued by the concept of this book. I can remember a time before internet access, had dial-up internet when we first got it at home and grew up in the pre-Facebook era. 1996 I was 10 years old so I had some slightly different interests than Josh and Emma.

Josh and Emma were best friends for a long time – basically since childhood – but approximately 6 months before the books starts something happened to throw them apart. Now Josh and Emma discovered Facebook – 10 years before its invention – and are stuck in this bizarre situation together.

Emma is a typical teenage girl. Her parents divorced a long time ago but her dad recently moved away and he and his new wife became parents to a baby girl not long ago while her mum is in one relationship after the other. She struggles with her life and cannot figure out what to do in the future. Since her fall-out with Josh even eating lunch in her small group of friends, which includes Josh, became difficult and now she is thrown into this internet glitch and is able to see her future.

Emma’s struggles felt so real and I cannot say what I would do if I were able to see my future just for second. Would I meddle with it or not look at all?

I really liked that while reading you felt the two different people behind Josh and Emma. I am not sure if the authors decided that Jay Asher writes Josh and Carolyn Mackler writes Emma but it felt that way. They have two totally different voices and their ways of looking at their discovery of Facebook is different too.

The Future of Us a novel with an interesting concept and captures teenage struggles with growing up really well. I enjoyed it.