The author:
Cassandra Clare was born to American parents in Teheran, Iran and spent much of her childhood travelling the world with her family, including one trek through the Himalayas as a toddler where she spent a month living in her father’s backpack. She lived in France, England and Switzerland before she was ten years old.
Since her family moved around so much she found familiarity in books and went everywhere with a book under her arm. She spent her high school years in Los Angeles where she used to write stories to amuse her classmates, including an epic novel called “The Beautiful Cassandra” based on a Jane Austen short story of the same name (and  which later inspired her current pen name).
After college, Cassie lived in Los Angeles and New York where she worked at various entertainment magazines and even some rather suspect tabloids where she reported on Brad and Angelina’s world travels and Britney Spears’ wardrobe malfunctions. She started working on her YA novel, City of Bones, in 2004, inspired by the urban landscape of Manhattan, her favourite city. She turned to writing fantasy fiction full time in 2006 and hopes never to have to write about Paris Hilton again.
source: Cassandra’s Homepage (shortened) 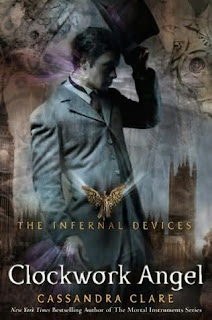 First sentences:
The demon exploded in a shower of ichor and guts.

Summary:
Magic is dangerous—but love is more dangerous still.
When sixteen-year-old Tessa Gray crosses the ocean to find her brother, her destination is England, the time is the reign of Queen Victoria, and something terrifying is waiting for her in London's Downworld, where vampires, warlocks and other supernatural folk stalk the gaslit streets. Only the Shadowhunters, warriors dedicated to ridding the world of demons, keep order amidst the chaos.
Kidnapped by the mysterious Dark Sisters, members of a secret organization called The Pandemonium Club, Tessa soon learns that she herself is a Downworlder with a rare ability: the power to transform, at will, into another person. What's more, the Magister, the shadowy figure who runs the Club, will stop at nothing to claim Tessa's power for his own.
Friendless and hunted, Tessa takes refuge with the Shadowhunters of the London Institute, who swear to find her brother if she will use her power to help them. She soon finds herself fascinated by—and torn between—two best friends: James, whose fragile beauty hides a deadly secret, and blue-eyed Will, whose caustic wit and volatile moods keep everyone in his life at arm's length...everyone, that is, but Tessa. As their search draws them deep into the heart of an arcane plot that threatens to destroy the Shadowhunters, Tessa realizes that she may need to choose between saving her brother and helping her new friends save the world...and that love may be the most dangerous magic of all.
source: The Infernal Devices Homepage

My opinion:
I love Cassandra Clare’s writing. Her books are always full of lovely characters and awesome bad guys (bad guy not villains) and her villains are so good (can villains be good? You know what I mean, right?). Clockwork Angel was no exception. I cannot believe it took me so long until I finally grabbed it from my shelf and read it. The book tells the story of Tess who after the death of her aunt comes to Victorian England to live with her brother. When she arrives in Southampton her brother is not there to welcome her but sent two Ladies, called the Dark Ladies, to pick her up. From this moment on Tess’ life changes completely.
The story is gripping from the first page onwards and never once is a perfect moment to stop reading to get a cup of coffee or go to bed. As always in Cassandra’s books there are twists and turns and the action keeps flowing; and every once in a while you are not sure who are the good and who are the bad guys.
A must-read for all the fans of The Mortal Instruments and thrilling, action packed, perfectly told paranormal stories. It will suck you in from the very beginning.

Clockwork Angel is available at Amazon in paperback and for your Kindle too. You can also buy it at Book Depo.

The Books in The Infernal Devices series are:
For more information about Cassandra Clare visit her Homepage, her Blog and her Facebook or Twitter page.
Posted by Karin at 8:00 AM