The author:
Robert Shields is the bestselling author of "Scarlet Fever: A Razorback House Divided" and "The Economics of Sex" and has written the weekly "From the Bench" sports column for the last 14 years. His newest novel, "Daphne and The Mysterious Girls Secret Bathroom Society" is part one of his new series. He also authored the book "Confessions of the Self Absorbed Observer: What I Saw Today." He has testified in a multitude of dockets and other legal proceedings. He graduated at the top of his economics class at the University of Arkansas and won the award as the "Most Outstanding Student in Economics."
source 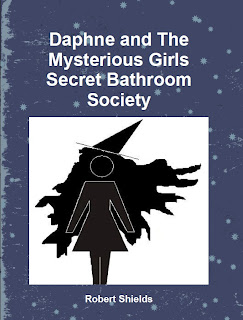 First sentence:
With wand raised, Daphne paused and looked at her No. 2 lead pencil with Ticonderoga written in the side of it.

The book:
Daphne seems to be an ordinary teenage girl, living with her sister and dad after the death of her mum. But one day at school she discovers that her archenemy Vivica is a witch when Vi turned a spell on her. Until then Daphne thought that Vi was just a bitch but obviously she is a witch – a real witch. At this point Daphne decides she wants to be able to practice magic too. So at home she grabs her No. 2 Ticonderoga pencil and tries the Static Inertia spell Vi did on her.
With the help of her best friend Lyla and her little sister Amanda, who are both witches themselves, Daphne learns a lot about witches and practicing magic. Every girl would be able to practice magic or physics as the witches call it but only some of them mastered it. Normally your mother teaches you how to do it but unfortunately for Daphne her mother passed away before she was able to.
Because of an incident at school Daphne, Lyla, Amanda, Vi and Vi’s friends are told to form a society because their mothers are not willing to protect them and their use of physics anymore. Vi is elected as Maven of the Choice which is the chief position of the society. Daphne is selected as Spy which means that she is the one who needs to provide.
Shortly after forming their Mysterious Girls Secret Bathroom Society the Branch (which is superior to the individual societies) sends out the order to watch for wizard activity. According to the history of witches, wizards died out during the times of the Battle of Hastings but it seems like there are some left and they seem to gain power.
Daphne, as the spy of their society, should find out more about this which brings her to spy school, some boys into danger and the Mysterious Girls Secret Bathroom Society closer together.

My opinion:
I received this book from the author on the 31st of December and started reading it right away. If I hadn’t attended a New Year’s Eve party I would have finished it on the same day.
It is a wonderfully written book with amazing characters and a thrilling storyline. Daphne and her little sister are incredibly well characterized and I loved them so much. Lyla is a wonderful best friend and tries to help Daphne understand her new found ability to practise physics.
The writing feels so real that I had troubles focusing in on the real world during breaks. I saw the whole story develop before my eyes and I was hooked.
The story of Daphne and her society develops really well during the book. The reader gets to know Daphne and her feelings towards the people surrounding her and also towards the boy she likes. After discovering that she is able to do physics Daphne learns quickly although she belatedly enters the world of witchcraft.

Daphne and the Mysterious Girls Secret Bathroom Society is the story of a modern witch in today’s world who is loveable and extremely clever when using her powers. She is loyal to her friends and family and tries to do the right things even if it means getting herself into danger with authority – magical authority.

According to the website of Fruitbat Books “Daphne and the Mysterious Girls Secret Bathroom Society” is the first in the series and I am really looking forward to the next books.

I want to thank the author Robert Shields for sending me his book for review.
I really enjoyed reading it.
Posted by Karin at 10:59 PM