Day 09
Best scene ever
Today’s question is an easy one to answer – strange but true. 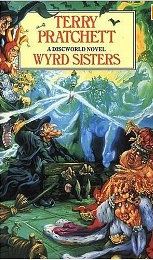 The best scene ever is from Terry Pratchett’s fantasy novel “Wyrd Sisters”. It is the one where the three witches go to watch a play at the castle. Those three witches are so fantastic characters. They are soooo funny and really entertaining.

The oldest of the three, Granny Weatherwax, lives alone in the woods and has hardly any contact to other people except her coven which only consist of Nanny Ogg and Margrat Garlick, the other two witches. Nanny Ogg in contrasts lives in the middle of Lancre town and loves to drink and party while Margrat is kind of shy and has a slight esoteric touch.

Granny can’t deal with the idea of a play. She isn’t able to accept that the actors are performing a play and that they do not desire interaction with the crowd. She talks loudly to Nanny Ogg about what she sees on stage and that she cannot understand why the actor who plays the king doesn’t see his enemy hiding behind the bushes and such.

This whole book is wonderfully written and so entertaining. Really worth reading and I am so thankful that Bernd, a friend of my family, introduced me to Terry Pratchett’s novels. Without him I would never have discovered this wonderful Discworld series.
Posted by Karin at 1:24 PM