Today is a though one. I have to decide on the best book I’ve read in the last 12 months. The BEST. Can you believe it? Well, I’ll try.

Day 03 - The best book you've read in the last 12 months:
Hmmmmm…I can’t think of just one good book...oh my god, that’s so hard for a crazy book person like me…just one?

Okay, that’s a bit easier. Let’s see….I read a lot since January but I really liked the last book I read and I didn’t pick it because it was the last I read and so the one I remember best. It is just such a nice book and so wonderful to read. It is more of an easy read and according to the blurb a rom-com. Cool name by the way. Much better than “chick-lit” which I personally find a little offending. 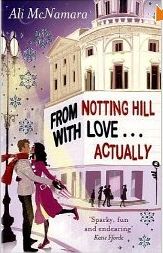 It is a book by Ali McNamara and is called “From Notting Hill with love…actually” and tells the story of Scarlett who is going to marry her fiancée David in just two month but does not seem that content with her life. So her friends and family (which is only just her father who brought her up as a single parent) encourage her to go to London, Notting Hill to housesit for friends. Scarlett is, appropriate to her name a film freak and she wants to prove them all that film scenes can really happen in real life. With the help of Oscar and Ursula and Ursula’s brother Sean she experiences many different movie scenes but when Scarlett tries to enforce some she usually fails. For her that proves that movies can happen in real life.
During the whole story there are many references to different movies mostly from the 90s and the new millennium like “Notting Hill”, “Bridget Jones’ Diary”, “Four weddings and a funeral” and many more.
While reading I often came to the point where I tried to remember those specific scenes in the various movies and came to the conclusion that I need to watch “Sleepless in Seattle” and also “Notting Hill” once more because some scenes I couldn’t recollect.

I really loved this book. It was easy to read but I could see the story unfold before my inner eye which I think is a marker for a well written book. Thankfully I experience this lots of times when I read.
Posted by Karin at 6:43 PM