The One With The Football Game

The reference of the post's title to the titles of Friends episodes is totally intentional ;) 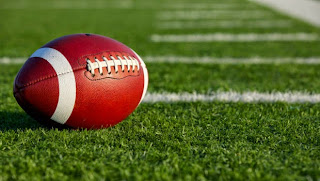 As some of you may already know, I have a good friend who introduced me to American Football about 5 years ago. He is a total sports guy, started watching NFL games on TV, began playing Flagfootball and landed on the Austrian National Flagfootball Team. He's also the one organizing our Superbowl Party each year and some years ago he invited me to come and watch with them. It took me about two quarters until I was able to follow the game without having to bother one of the guys for explanation and since that day I am at least invited to the Superbowl each February.

A couple of months ago said friend hinted at the opportunity of us watching a Football game at the stadium one day and two weeks ago I took the liberty of reminding him of this promise. On Sunday we and two other friends went to a game between local team and one from Germany and it was so much fun. We weren't so sure that the weather would be cooperative but in the end we sat in the grass, had some beers, burgers and ice cream and watched the Germans beat our butts while the sun was shining on our backs. It was a lovely way to spend a Sunday and I totally get why Ellice and many other Americans love spending their weekends at Football games. It's just a great way to have a lovely day outside with people you love, good food and entertainment.

It took me 29 years till I entered a stadium in Austria to watch a game. When I was about 5 me and my parents watched a Baseball game in the States and when the European Soccer Championships were in Austria and Switzerland, everyone I know attended the public viewing when Austria played Germany at the soccer stadium in my district and we had a huge party there but on Sunday was the first time I ever watched any game live and I kind of want to do that more often.
Posted by Karin at 5:18 PM