The Fascination of Steampunk

Have you ever wondered what Steampunk is exactly?

“Steampunk is a sub-genre of science fiction that typically features steam-powered machinery, especially in a setting inspired by industrialized Western civilization during the 19th century. Therefore, steampunk works are often set in an alternative history of the 19th century’s British Victorian era or American “Wild West”, in a post-apocalyptic future during which steam power has regained mainstream use, or in a fantasy world that similarly employs steam power. Steampunk perhaps most recognizably features anachronistic technologies or retro-futuristic inventions as people in the 19th century might have envisioned them, and is likewise rooted in the era’s perspective on fashion, culture, architectural style, and art.”

Steampunk is up and coming not only in the YA genre but all over the place. Since 2009 many great  Steampunk series such as Gail Carriger’s Parasol Protectorate novels (Soulless, Changeless, Blameless, Heartless, Timeless), Scott Westerfeld’s Leviathan trilogy (Leviathan, Behemoth, Goliath) and Cassandra Clare’s The Infernal Devices trilogy (Clockwork Angel, Clockwork Prince, Clockwork Princess) were published and since 2003 with the release of the movie The League of Extraordinary Gentlemen the film industry produced many Steampunky movies such as Van Helsing (2004), The Golden Compass (2007) and both Sherlock Holmes movies starring Robert Downey Jr. and Jude Law (2009 and 2011 with a third film that should come out in 2015).

Everywhere you look Steampunk is a thing right now and everyone knows the term. Many can name certain books or movies that deal with this theme and almost everyone knows that Jules Verne’s works could be classified as Steampunk although he lived from 1828 to 1905.
In my family Steampunk is well known, not only because I read a lot and there are a fair amount of Steampunk novels on my shelves but also because my uncle and my cousin’s long-term girlfriend are huge Steampunk fans. Whenever I see my uncle we start talking about Steampunk and last year he decided to transform my aunt’s office into a Steampunky one. It matches their house perfectly and in June I finally had a chance to look at it and I have to tell you it is fabulous. My cousin’s girlfriend got Steampunk jewelry for Christmas and when I was talking to Hannah about her Clockwork Carnival I immediately had an idea for a blog post.

I asked my uncle, my cousin’s girlfriend and Hannah what fascinates them about Steampunk.
Here are their answers:
My uncle, who is so not a reader at all, told me that he is fascinated by the huge variety of things that can be seen as Steampunk. The small machines that consist of so many components and are all built with love and devotion, the different takes on Steampunk films, that Jules Verne experimented with this genre over a hundred years ago and that he is seen as the “Godfather of Steampunk”. 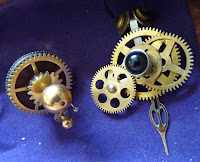 I love the variety of Steampunk – it can be found in books, films, jewelry, fashion, etc. It is a way of life! Exploring all those different ways the genre expresses itself and stumbling over little hidden references towards Steampunk is something I appreciate a lot. Whenever I read a Steampunk novel I can see the story evolve before my inner eye because all of those I read are written so well and suck you into their world. Every time someone talks to me about Steampunk I see a dark, dusty and foggy London and cannot help but smile. For me this genre lives from the huge variety and the large amount of feelings it awakens in all of us. Steampunk is unique and combines the love of the old (aka Victorian times) with modern features (aka the machines and inventions) and a very special way of transporting them either via screen or via the pages of a book, which clearly is my favorite way of
experiencing Steampunk.

When I asked Hannah she wrote the following:
”Ooh good question.. Steampunk is unlike any genre out there. You find it as a setting for fantasy novels, a world in urban fantasy, and the stories in Science Fiction. It can be subtle and flamboyant and it is fascinating to see how different authors use it. However, it is also so much more. For many Steampunkians it is a culture and a way to express themselves. There are so many aspects to Steampunk and I love to explore them all.”

And with this wonderful declaration of love to Steampunk I will leave you now but not without asking you why you are fascinated with this genre and what is your number one book or film you can recommend me reading/watching?
Posted by Karin at 7:00 AM

Email ThisBlogThis!Share to TwitterShare to FacebookShare to Pinterest
Labels: ... in books, Steampunk