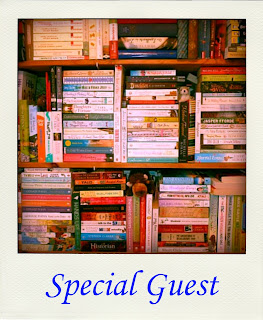 Welcome to my new Blog Feature!

I am really excited to present it to you and I am even more excited to have Claire LaZebnik stop by for my first author interview. Her novel “Epic Fail” was the first Young Adult novels I read since I was a young teenager and after reading it I fell in love with YA novels.

Claire agreed to do an author interview and here are her answers to my questions:
What gave you the idea to publish your novel Epic Fail?

Epic Fail is loosely based on Jane Austen's Pride and Prejudice, one of my favorite novels of all time. I've been writing novels for adults for many years, but I wanted to try writing a YA novel and thought it would be fun to update such a funny and romantic book.  I was lucky enough to find an editor at HarperCollins who agreed!

Was it easy to write it with such a well known story as your basic storyline?

The hardest part was figuring out Derek's character. I wanted the other students at school to treat him like he's special, but wasn't sure how to give him all that status in a believable way. When I decided to make him the son of two famous movies stars, everything else sort of fell into place. Well, not everything - I did struggle a bit with Webster (the villain) - how to make him evil enough to hate, but not so evil it would be upsetting to younger readers. I think I worked it out, but it took a few drafts.

Who is your favorite Benton sisters and why?

Elise is my favorite, simply because she's the most relatable one. Juliana is a little too nice and kind and the other two can be annoying. Elise is funny and smart and insightful and yet still finds herself in embarrassing situations, so she's pretty likable. Her one flaw is that she's so determined not to fawn over Derek because his parents are famous that she goes too far in the other direction and doesn't give him enough of a chance with her.

Was it easy to write a YA novel and what are the differences in writing one to an adult novel?

It was definitely FUN to write a YA novel - I don't know about easy. There's always a lot of work in producing a finished 300 page manuscript, and this was no exception, but I loved the characters and knew where the plot had to go, so it wasn't the hardest thing I've ever written.

I'd say there are two main differences between writing for adults and writing YA. The first is obvious: I tried to keep it "clean," so anyone could read it, by avoiding swear words (for the most part) and not including any sex scenes or anything like that. The second major difference, for me at least, was that I tried to make it very clear what was going on in Elise's mind at any given moment. I expect adult readers to infer a lot and fill in the blanks, but I wanted to make sure the younger readers were completely included in Elise's thoughts and motives.

What inspires you to write?

I love to read. It's my favorite way to relax, so I feel like if I can provide that pleasure for other people, I'm doing something I can feel good about. And I genuinely enjoy writing (although you wouldn't know it from the way I procrastinate). When a book is really working, really moving along, it's as pleasurable to write it as it would be to read it - you have the same sense of discovery and enjoyment. I learn to care about my characters and I want to see them safely through to a happy ending (I like happy endings).

How would you describe your typical writing day?

I get up, get the kids off to school (after making their lunches), feed and exercise the dogs and cat, catch up on emails and my various author pages, and then run any errands I need to run. Once I've done all that - and assuming the kids are at school and not home sick or on vacation and I don't have any meetings - I try to get some writing done. I am not disciplined. I write a little, check Facebook, write a little more, play with the dogs, write a sentence or two, eat lunch and walk the dogs, and so on until the kids come home from school and I'm doing stuff with them or cooking dinner. Sometimes I squeeze a little work in after dinner - especially if I have a deadline looming - but usually I'm too tired.

When was the first time you saw yourself as an author?

I'm not sure I've ever really seen myself as that! I always feel like a bit of a phony, like I'm getting away with something when an editor agrees to publish a book of mine. But I guess when you see a published book in a bookstore with your name on it, it's pretty validating. My great hope is one day to stumble across some stranger reading my book on an airplane or at a pool or some place like that. That would be really exciting - but it hasn't happened yet.


Do you have a favorite book and/or author?

Emma by Jane Austen, probably. Pride and Prejudice runs a close second. I chose P&P to base a book on, though, because there's a movie called Clueless that's such a perfect update of Emma, I knew I could never do as good a job. I reread both those novels regularly.
Thank you Claire for taking the time to answer all my questions!

Claire already wrote her next YA novel called The Trouble with Flirting which is due out in winter 2012/3.

Keep your eyes open for that and check out my review of Epic Fail!

Email ThisBlogThis!Share to TwitterShare to FacebookShare to Pinterest
Labels: ... in books, Special Guest