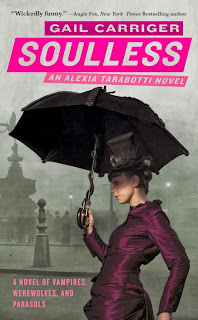 First sentence:
Miss Alexia Tarabotti was not enjoying her evening.

Summary:
First, she has no soul. Second, she's a spinster whose father is both Italian and dead. Third, she was rudely attacked by a vampire, breaking all standards of social etiquette.
Where to go from there? From bad to worse apparently, for Alexia accidentally kills the vampire and then the appalling Lord Maccon (loud, messy, gorgeous, and werewolf) is sent by Queen Victoria to investigate.
With unexpected vampires appearing and expected vampires disappearing, everyone seems to believe Alexia responsible. Can she figure out what is actually happening to London's high society? Will her soulless ability to negate supernatural powers prove useful or just plain embarrassing? Finally, who is the real enemy, and do they have treacle tart?
source: Goodreads

My opinion:
Soulless is the first book in Gail Carriger's steampunk series telling the story of Miss Alexia Tarabotti, 27 year old soulless spinster, living with her horrible sisters, her terrible mother and her mother's new husband in Regency London.
Alexia is not one of the soft hearted girls. She and her trusty parasol are able to kill vampires and wound werewolves and those skills are needed right from the beginning of the novel onwards.

Alexia Tarabotti is one of the strongest female characters I came across in modern day literature. She lives in Regency London as a spinster, which makes her an outcast of society. She has to bear her sisters' mocking and her only friends are a gay vampire rove and a girl with terrible taste in dresses and hats. She does not take s**t from anyone and fights for her rights – if necessary with her trusty umbrella.

Lord Conall Maccon, the local werewolf alpha, head of BUR and originally from Scotland, initially has his difficulties with the feisty Alexia, especially after the hedgehog incident but after he realizes that he can be himself with her he gets more comfortable in her presence.

Gail Carriger's writing style is brilliant. The story is engaging and thrilling from the first page to the last and has some laugh-out-loud moments. I received strange looks on the train more than once. The main characters are a lovely bunch and I cannot pick a favorite because each and every one of them is special in his or her own ways. I really love Lord Akeldama, the gay vampire friend, and Floote, the butler who is super protective of Alexia and always seems to know everything and of course loyal Professor Lyall, the Woolsey werewolf pack Beta, who warmed my heart from his first appearance.

Soulless is a witty, funny and clever, Alexia is as un-Victorian as possible but still not out of place and the perfect protagonist. She will always get her way and is a strong female character in a predominantly male society, except for the Queen, of course.

If you like paranormal novels, steampunk or books with strong female characters – read Soulless. If you are not a big fan of vampires, werewolves and other paranormal creatures give this series a try. It might change your opinion on the paranormal genre.

The books in the Parasol Protectorate series are:
For more information about Gail Carriger visit her Homepage, Blog, Facebook or Twitter page.
Posted by Karin at 7:00 AM

Email ThisBlogThis!Share to TwitterShare to FacebookShare to Pinterest
Labels: ... in books, review, Steampunk