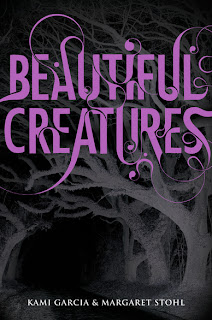 First sentences:
There were only two kinds of people in our town.

Summary:
There were no surprises in Gatlin County.
We were pretty much the epicenter of the middle of nowhere.
At least, that's what I thought.
Turns out, I couldn't have been more wrong.
There was a curse.
There was a girl.
And in the end, there was a grave.
Lena Duchannes is unlike anyone the small Southern town of Gatlin has ever seen, and she's struggling to conceal her power and a curse that has haunted her family for generations. But even within the overgrown gardens, murky swamps and crumbling graveyards of the forgotten South, a secret cannot stay hidden forever. Ethan Wate, who has been counting the months until he can escape from Gatlin, is haunted by dreams of a beautiful girl he has never met. When Lena moves into the town's oldest and most infamous plantation, Ethan is inexplicably drawn to her and determined to uncover the connection between them. In a town with no surprises, one secret could change everything.
source: Goodreads

My opinion:
Wow! For a long time I struggled with writing this review because I had no idea what I wanted to say about Beautiful Creatures. This book blew me away. I started it three times, I think, because it never felt right and then I flew through it in a few days and couldn’t stop reading.

The story is gripping and full of darkness and suspense. From time to time I had to focus my attention to the world surrounding me just to be sure that I was not in Gatlin but in a tram in Vienna. It doesn’t happen often that I am as sucked into a book as I was into this one. The way Kami Gracia and Margaret Stohl are able to write a complex story like this as an author team deserves respect. I picture writing as a team as more challenging than writing alone but maybe I am wrong.

The overall word I would use to describe Beautiful Creatures would be “Dark”. Before my inner eye Gatlin was always dark and cloudy and every time something a bit creepy happened I pictured it a dark and stormy night. Don’t get me wrong this book was amazing but in a bit creepy way that conveyed the supernatural setting so well.

I still think that this review is one of the most incoherent I ever wrote but I still have problems telling you how fascinating I found the book in a way that isn’t: “Read it, it’s awesome!”
I hope I didn’t do as bad as I think and you will go and read it. I cannot wait to read the second book in the series but unfortunately it is always sold out at my local bookstore but if I can’t find it till February I’ll order it from Amazon – take that bookstore!

If you want to get a feel for the book check out this video by CoraLynnsBookReviews (she reads a small part a hillarious chapter in a real Southern drawl).

The Books in the Caster Chronicles are:

The movie to Beautiful Creatures will be in cinemas in 2013.