Review
One for the Money
by Janet Evanovich 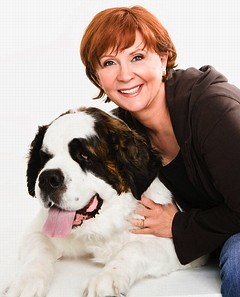 When I was a kid I spent a lot of time in LaLa Land. La la Land is like an out-of-body experience –while your mouth is eating lunch your mind is conversing with Captain Kirk. Sometimes I’d pretend to sing opera. My mother would send me to the grocery store down the street, and off I’d go, caterwauling at the top of my lungs. Before the opera thing I went through a horse stage where I galloped everywhere and made holes in my Aunt Lena’s lawn with my hooves. Aunt Lena was a good egg. She understood that the realities of daily existence were lost in the shadows of my looney imagination.
After graduation from South River High School, I spent four years in the Douglass College art department, honing my ability to wear torn Levis, learning to transfer cerebral excitement to primed canvas. Painting beat the heck out of digging holes in lawns, but it never felt exactly right. It was frustrating at best, excruciating at worst. My audience was too small. Communication was too obscure. I developed a rash from pigment.
Somewhere down the line I started writing stories. The first story was about the pornographic adventures of a fairy who lived in a second rate fairy forest in Pennsylvania. The second story was about …well never mind, you get the picture.
I sent my weird stories out to editors and agents and collected rejection letters in a big cardboard box. When the box was full I burned the whole damn thing, crammed myself into pantyhose and went to work for a temp agency.
Four months into my less than stellar secretarial career, I got a call from an editor offering to buy my last mailed (and heretofore forgotten) manuscript. It was a romance written for the now defunct Second Chance at Love line, and I was paid a staggering $2,000.
With my head reeling from all this money, I plunged into writing romance novels full time, saying good-by, good riddance to pantyhose and office politics. I wrote series romance for the next five years, mostly for Bantam Loveswept. It was a rewarding experience, but after twelve romance novels I ran out of sexual positions and decided to move into the mystery genre.
I spent two years retooling –drinking beer with law enforcement types, learning to shoot, practicing cussing. At the end of those years I created Stephanie Plum. I wouldn’t go so far as to say Stephanie is an autobiographical character, but I will admit to knowing where she lives.
In ’95 my husband and I moved to New Hampshire. We bought a big ‘ol house on the side of a hill, not far from Dartmouth College. I have a nice view of the Connecticut River valley from my office window and there are a couple acres of land around the house.
It’s a good place to write a book … and would be even better if we just had a decent mall. You can take the girl out of Jersey, but you can’t take Jersey out of the girl.
When we moved to New Hampshire we realized there was more to this writing stuff than just writing, so we formed a family business, Evanovich, Inc. My son, Peter, a Dartmouth College graduate, assumed responsibility for everything financial. He’s the guy who pulls his hair out at tax time and cracks his knuckles when the stock market dips.
In ’96 my daughter Alex, a film and photography school graduate, came on board and created the website. Alex does it all … the E-mail, the comics, the store, the online advertising and the newsletter. Both Peter and Alex work full-time for Evanovich, Inc. I’m their only client.
My husband, Pete, has his doctorate in mathematics from Rutgers University and now manages all aspects of the business and tries to keep me on time (a thankless, impossible job!) … plus he does a little golfing and skiing.
It turns out I’m a really boring workaholic with no hobbies or special interests. My favorite exercise is shopping and my drug of choice is Cheeze Doodles.
I read comic books and I only watch happy movies. I motivate myself to write by spending my money before I make it. And when I grow up I want to be just like Grandma Mazur.
source: Janet’shomepage 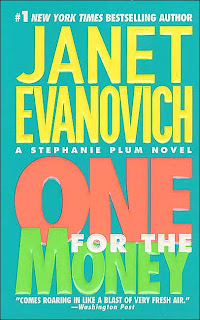 First sentences:
There are some men who enter a woman’s life and screw it up forever. Joseph Morelli did this to me – not forever but periodically.

Summary:
Watch out, world. Here comes Stephanie Plum, a bounty hunter with attitude. In Stephanie’s opinion, toxic waste, rabid drivers, armed schizophrenics, and August heat, humidity, and hydrocarbons are all part of the great adventure of living in Jersey.
She’s a product of the “burg,” a blue-collar pocket of Trenton where houses are attached and narrow, cars are American, windows are clean, and (God forbid you should be late) dinner is served at six.
Now Stephanie’s all grown up and out on her own, living five miles from Mom and Dad’s, doing her best to sever the world’s longest umbilical cord. Her mother is a meddler, and her grandmother is a few cans short of a case.
Out of work and out of money, with her Miata repossessed and her refrigerator empty, Stephanie blackmails her bail bondsman cousin, Vinnie, into giving her a try as an apprehension agent. Stephanie knows zilch about the job requirements, but she figures her new pal, fearless bounty hunter Ranger, can teach her what it takes to catch a crook.
Her first assignment: nail Joe Morelli, a former vice cop on the run from a charge of murder one. Morelli is also the irresistible macho pig who took Stephanie’s virginity at age sixteen and then wrote the details on the bathroom wall of Mario’s Sub Shop. There’s still powerful chemistry between these two, so the chase should be interesting.
It could also be extremely dangerous, especially when Stephanie encounters a heavyweight title contender who likes to play rough. Benito Ramirez is known for his brutality to women. At the very least, his obsession with Stephanie complicates her manhunt and brings terror and uncertainty into her life. At the worst, it could lead to murder.
source: Janet’s homepage

My opinion:
Watch out Trenton Stephanie Plum is here to kick ass!
Stephanie Plum protagonist of Janet Evanovich’s Stephanie Plum series was recently let go of her job as lingerie buyer at E.E. Martin. Her mother wants her to find a man and she wants to find a job where there’s quick money to make due to the fact that her car was just impounded and her rent isn’t paid. So she blackmails her cousin Vinnie, owner of Vincent Plum Bail Bonding Company, into giving her a job as Recovery Agent, better known as Bounty Hunter. This is where the chaos starts.

I love the Stephanie Plum novels. They are laugh-out-loud novels with awesome loveable characters, like Grandma Mazur and Lula. And don’t forget Ranger and Joe – two extremely yummy guys.

One for the money is the first in the series and an incredible beginning. Stephanie Plum is a real life, down to earth protagonist who is willing to learn – mostly from her mistakes – and tries her best in capturing FTAs (failure to appear in court).  Ranger, a fellow bounty hunter and Steph’s mentor tries his best to help her learn the basics but isn’t that successful. Joe is now a cop but was the guy Stephanie once sold a cannoli and who charmed the pants off of her in no time and Steph can hold a grudge. Her family consists of her mother and father, her Grandma Mazur and her hamster Rex who lives in an old soup can in Stephanie’s apartment.

If you haven’t read One for the Money and you like reading mystery novels, you should really go get it. Just to be sure how much you’ll like it, you can read the first chapter here.

Janet Evanovich’s Stephanie Plum novels are all numbered.
Starting with:
and the between the numbers novellas:

One for the Money was made into a movie recently starring Katherine Heigl as Stephanie Plum, Debbie Reynolds as Grandma Mazur and Jason O’Mara as Joe Morelli. I can really recommend this movie. It is hilarious and sticks quite closely to the book (which I would read first). Katherine Heigl is a perfect Stephanie Plum – just the way I imagined her.
Watch the trailer here: