I have to tell you something:
I love books that deal with time-travel, incarnation and similar topics.

That is why I instantly fell in love with Michelle Madow's books in her Transcend Time Saga. They have a theme that appealed to me, her writing is amazing and the characters are really realistic. They have flaws, are jealous and make mistakes but they are also great friends, people who fall in love head over heels (which I'm sure happened to all of us at 16) and try to help their friends if they need help.

Today I am going to present you, my post for the Transcend Time Book Blitz hosted by Xpresso Book Tours.


REINCARNATION IN THE TRANSCEND TIME SAGA


An explanation of how reincarnation works in the series
To write the Transcend Time Saga, I had to create my own version of reincarnation. The first thing I did was research reincarnation on the Internet. Even though I don’t personally believe in reincarnation, I had fun learning about it. There are tons of websites on the topic—from ancient Buddhist beliefs to people who claim there are scientific ways to prove reincarnation. It was interesting doing the research, but I came across a problem: Nothing was fitting into the story I had started to create about Lizzie and Drew.

Then I realized something: Remembrance was going to be a work of FICTION, so I was free to create my own version of reincarnation!


The main thing I knew about Lizzie’s story was that she had a dramatic early death in her first life that made it so she couldn’t be with her soul mate, Drew. She and the people close to her who were negatively impacted by her death had been reincarnated to set things right. I decided to create my own version of reincarnation that revolved around that idea.

I created a Word document with bullet points describing the important aspects of reincarnation in the Transcend Time Saga. This document is called “Reincarnation Rules,” and this is the first time I am sharing it with readers.

Here are some of the basic Reincarnation Rules in the Transcend Time Saga:

1) The only reason a person will be reincarnated is if they have to change something dramatic that left them unfulfilled in their past life. They continue being reincarnated until they do this.

2) Most people are not reincarnated. Once they live one life, they go to Nirvana. Most people living on Earth are “New Souls.”

3) Major events in present day lives parallel past lives, so people will be thrown into situations with other reincarnated souls from their past.

4) Their physical features are similar to those they had in their past lives, although not so similar that they look the exact same.

5) A big part of initially remembering a past life is a recognition of the soul of a person they had a positive deep connection to, usually a soul mate. (In Lizzie’s case, this person was Drew.) If you were friends with someone in a past life (like Lizzie/Chelsea and Elizabeth/Catherine), you will feel very close to that person, but they will not trigger memories of the past to return.

6) Objects from the past will also serve as triggers. (Lizzie loved Pride and Prejudice in her past life, so reading the book for her English class triggered her memories. Drew built the music box for Lizzie in his past life, so seeing the music box again triggered his memories.) However, people usually believe their memories to be figments of their imaginations until they meet the person who is their “big trigger.”

7) A soul can only reincarnate into the same species it started in. (You cannot be a human in one life and a dog in the next.)

9) People don't reincarnate immediately. They reincarnate during a good time for them to complete whatever it is they need to do to sort out the issues they had in their past life. Plus, if a spirit went through something traumatic in their life (usually resulting in death), they need time to recover.

After I had those basic ideas, Lizzie and Drew’s story pieced together as I wrote. I outlined the book before writing the draft, but it was still fun to see their story unfold.

I reviewed all three books in the Transcend Time Saga and did an author interview with Michelle:

If you want to check out the books, here are the synopsis' for all three:
(Attention: they might contain spoilers!) 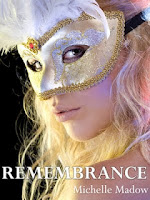 
Lizzie Davenport has been reincarnated from Regency Era, England ... but she doesn't know it yet.

Then Drew Carmichael transfers into Lizzie's high school at the beginning of the year, and she feels a connection to him, almost like she knows him. She can't stop thinking about him, but whenever she tries talking with him about the mysteries behind her feelings, he makes it clear that he wants nothing to do with her. Reaching him is even more difficult because she has a boyfriend, Jeremy, who has started to become full of himself after being elected co-captain of the varsity soccer team, and her flirtatious best friend Chelsea starts dating Drew soon after his arrival. So why can't she get him out of her mind?

Even though Lizzie knows she should let go of her fascination with Drew, fighting fate isn't going to be easy.


Right now you can buy Remembrance for only 0,99c

How far would you go to get revenge?

When Chelsea Givens discovered that her ex-boyfriend Drew dumped her to be with her former best friend Lizzie, she'd never felt so betrayed in her life. Then her new friend Shannon tells her she can help set things right. Chelsea's willing to listen, but what Shannon wants her to believe -- that she shared a past life with Drew -- is impossible. And what she wants her to do to get him back … well, it's downright crazy.

Could Shannon be telling the truth? And if she is, what lengths will Chelsea go if it means making Lizzie pay?

Find out in Vengeance, the second part of the Transcend Time Saga.

*Vengeance is the short story that bridges the events in Remembrance and the final novel in the Saga.

IT'S A RACE AGAINST TIME.

In Remembrance, Lizzie and Drew changed the course of fate so they could be together.

In Vengeance, Chelsea set fate back on its original, deadly path.

Now, strange things keep happening to Lizzie. Things that are omens of darkness to come. A curse has doomed her to die an early death, just as she did in her past life. To make matters worse, even if she can figure out who cast the curse, it's irreversible. There's only one option left for her to save herself. It's crazier than anything she's heard yet, and to do it, she'll need Drew and Chelsea's help.

Because to make things right, they must go back to when it all began ... and Lizzie discovers that the final events in her past life were more sinister than she ever imagined.


Transcendence
A bonus pack filled with lots of information about the Transcend Time Saga, character information, character interviews and much more. It is available for free download here.

And because Michelle is super awesome, one of you can win an e-copy of Remembrance (open internationally). The contest will run from today until March, 30th 2013. To enter fill out the form below:

a Rafflecopter giveaway
Posted by Karin at 7:00 AM

Email ThisBlogThis!Share to TwitterShare to FacebookShare to Pinterest
Labels: ... in books, blog tour