Review
The Archived
by Victoria Schwab 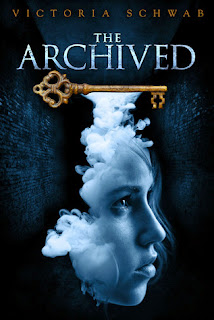 First sentences:
The Narrows remind me of August nights in the South.

Summary:
Imagine a place where the dead rest on shelves like books.
Each body has a story to tell, a life seen in pictures that only Librarians can read. The dead are called Histories, and the vast realm in which they rest is the Archive.
Da first brought Mackenzie Bishop here four years ago, when she was twelve years old, frightened but determined to prove herself. Now Da is dead, and Mac has grown into what he once was, a ruthless Keeper, tasked with stopping often—violent Histories from waking up and getting out. Because of her job, she lies to the people she loves, and she knows fear for what it is: a useful tool for staying alive.
Being a Keeper isn’t just dangerous—it’s a constant reminder of those Mac has lost. Da’s death was hard enough, but now her little brother is gone too. Mac starts to wonder about the boundary between living and dying, sleeping and waking. In the Archive, the dead must never be disturbed. And yet, someone is deliberately altering Histories, erasing essential chapters. Unless Mac can piece together what remains, the Archive itself might crumble and fall.

My opinion:
I must confess something:
I fell in love with Victoria Schwab while I was watching her Making History videos before the release of The Archived!

I never heard anyone talk about her first novel The Near Witch and discovered her one day while browsing YouTube and watched all her videos. She seemed like such a lovely person that I went and check out her books online and ordered The Near Witch and preordered The Archived. That is something that never happens because I usually check to make sure that I like someone’s writing style before ordering a second book. That’s how much I fell in love with Victoria!

The minute The Archived arrived on my doorstep I had to read it and wasn’t disappointed. If I had to describe the book in one word it would be: enthralling!

Mac is a Keeper for the Archive and her job is it to bring Histories back to the safety of the Archive but when she and her parents move to a new home, her job gets more stressful and mysterious.

Mac is a 16 year old girl who still grieves about her recent loss and right now her parents decide to move and separate her from her best friend too. Mac is a strong character. She knows what is expected from her both in the real world and in the Archive and she does not disappoint. But Mac is also very curious and when strange things start to happen she starts snooping around and things start to get dangerous. I really liked Mac and her dedication to her job as Keeper. It must be really hard to live a second life like her at such a young age. She went through a lot already but she doesn’t wallow but gets on with her life and starts investigating what happened at her new home many years ago.

The story is gripping and fast paced and I had difficulties setting the book down and do things that needed to be done. So if you want to read The Archived, and I’m sure you do, then set aside a weekend and dive into the story.

I adored The Archived and cannot wait to read The Unbound which unfortunately won’t be out till January, 2014. A highly addicting novel, great writing style, wonderful story and lovely characters – go read it!


The books in the Archived series are:

For more information about Victoria Schwab visit her Homepage, her Blog and her Twitter page or Victoria's YouTube channel.
Posted by Karin at 7:00 AM