Review
The Girl in the Steel Corset
by Kady Cross 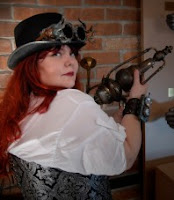 Kady Cross is a pseudonym for USA Today bestselling author Kathryn Smith. She lives in Connecticut with her husband and a pride of cats. She likes singing with Rock Band on the 360, British guys, Vietnamese food, and makeup (she’s hopelessly addicted to YouTube makeup tutorials!). When she’s not writing Kady likes to catch up on her favorite TV shows, read a good book or make her own cosmetics.
source: Homepage 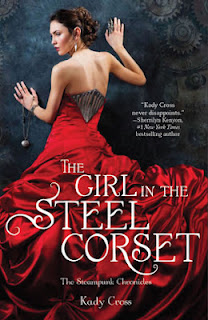 The moment she saw the young man walking down the darkened hall towards her, twirling his walking stick, Finley Jayne knew she’d be unemployed before the sun rose.

Summary:
In 1897 England, 16-year-old Finley Jayne is convinced she's a freak. No normal Victorian girl has a darker side that makes her capable of knocking out a full-grown man with one punch. Only Griffin King sees the magical darkness inside her that says she's special . . . that she's one of "them."
source: Goodreads

My opinion:
Steampunk is a great genre and this book is one of the best I read in it so far!

Finley Jayne, a not so normal 16 year old girl in Victorian England, meets Griffin King and his friends, who are not quite normal themselves. She is the perfect addition to their little group.
It is the year of Queen Victoria’s diamond jubilee and The Machinist – an evil mind – builds automatons which sometimes attack people. Griffin and his friends assume that he plans an attack on the Queen on her special day but is there a way to prevent this from happening?

Kady Cross manages to fill a whole book with lovely characters. Well okay, they are not all lovely but beautifully portrayed, life like and you can get totally lost in their stories. Finley is a great main character because we get to know Griffin's world through her eyes. She's a clever girl who is able to fight for her rights and doesn't take s**t from no one. Griffin, who takes Finley in, Emily and Sam, his friends, are all well established within the posher Victorian society while Finley is a simple girl and has to find her place in this world. She also has to fight for recognition within Griffin's “family”.

The story of the book keeps you on the edge at all times and I had a hard time setting it down to get on with my life because it's so gripping. The world is perfectly constructed and the use of Steampunk elements is just perfect. I cannot wait to read “The Girl in the Clockwork Collar”.

Everyone who is interested in Steampunk or wants a light introduction to this genre should pick up Kady Cross' Steampunk Chronicles. I can highly recommend this series to all of you!

The Books in the Steampunk Chronicles are:
For more information about Kady Cross visit her Homepage, her Blog, her Facebook or Twitter page.
Posted by Karin at 8:00 AM