Review
From Notting Hill with Love…Actually
by Ali McNamara

The author:
Ali McNamara attributes her over active imagination to one thing - being born an only child. Time spent when she was young dreaming up adventures has left her with a head constantly bursting with stories waiting to be told.
As a child Ali suffered badly from Rheumatoid Arthritis, and as a result was unable to participate in sport at school. But more than made up for that later in life when she qualified as a Personal trainer and Fitness Instructor, with a special interest in exercise as an aid to healing medical conditions.
When stories she wrote for fun on singer Ronan’ Keating's website became so popular they were sold as a fundraising project for his cancer awareness charity, Ali realised that not only was writing something she enjoyed doing, but something others enjoyed reading too.
Ali lives in Cambridgeshire with her husband and two children, and when she isn’t writing, she enjoys watching too much reality TV, eating too much chocolate, and counter-acting the results of the previous activities with plenty of exercise!
source: Goodreads 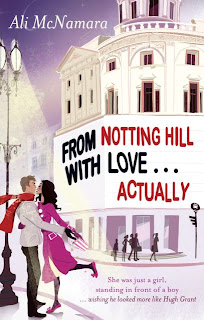 First sentences:
I didn’t feel much like Julia Roberts as I emerged from the hot and crowded London underground.

Summary:
Scarlett O'Brien is in love . . . with the movies. Utterly hooked on Hugh Grant, crazy about Richard Curtis, dying with lust for Johnny Depp, Scarlett spends her days with her head in the clouds and her nights with her hand in a huge tub of popcorn. Which is not exactly what her sensible, DIY-obsessed fiancé David has in mind for their future. So when Scarlett has the chance to house-sit an impossibly grand mansion in Notting Hill, the setting of one of her all-time favourite movies ? she jumps at the chance to live out her film fantasies one last time. It's just a shame that her new neighbour Sean is so irritating ? and so irritatingly handsome, too. As a chaotic comedy of her very own erupts around Scarlett, she begins to realise there's more to life than seating plans and putting up shelves. What sort of happy ending does she really want? Will it be a case of Runaway Bride or Happily Ever After? The big white wedding looms, and Scarlett is running out of time to decide.
source: Goodreads

My opinion:
This was the first of Ali McNamara’s books I read (it also was the first to be published) and I loved it. I read it three times already because it is just THE perfect feel-good book. Scarlett is in love with the cinema and the bothers some of the people close to her. She is often daydreaming which annoys her fiancé David tremendously. Scarlett’s wedding is just months away and her dad proposes that she moves from Stratford (yes, the town of the Bard) to London’s famous district Notting Hill to get her head together before the wedding. Scarlett has other plans. She wants to convince her dad, her fiancé and her best friend that you can experience movie scenes in real life.
This book is the perfect read for movie fans, romantic comedy lovers and everyone who wants to read a funny, entertaining and wonderful (love) story.

From Notting Hill with Love…Actually is available at Amazon in paperback and for your Kindle too. You can also buy it at Book Depo. 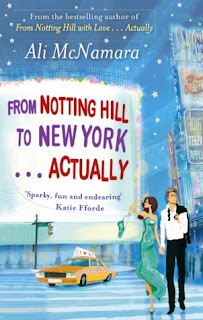 For more information about Ali visit her blog, her Facebook or Twitter page.
Posted by Karin at 8:00 AM