The commander went, as they say in Ankh-Morpork, totally Librarian on them. 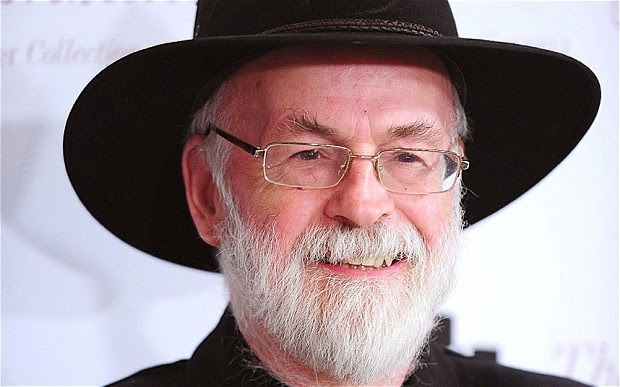 If you are following my blog for a while now, you might have noticed my love for Terry Pratchett and his Discworld novels. I talked about it here and here and lots of other times too.

On March 12th one of my favorite authors closed his eyes forever and joined DEATH in his domain. We all knew that he was sick and that this day would come sooner rather than later but it still hit me pretty hard when I heard the news. He was the mastermind behind all 40 books in the famous Discworld series (the 41st book which he finished before he died will be published this fall) and many other great books, including Good Omens which he wrote with Neil Gaiman. I own all 40 Discworld novels and I read at least 30 of them - many twice or three times already. I also own my favorite ones mulitple times. I own 4 copies of Wyrd Sisters because the first one I got as a gift and read it so many times that it is almost falling apart, so I had to buy a second copy and I also have the beautiful cloth-bound edition and recently I found it in a bookstore for under 4 Euros and it looked so sad that I had to take it home (great argument, right?).

Terry Pratchett showed me the way into the fantasy genre, created some of my favorite characters ever, made me laugh, made me cry and made me think about life and the things we do without appreciating them. His books are loved by me, my mum, good friends and even my cousin who does not read (and I still love him - Go me!) listens to his books as audio-books and adores them.

His books will always have a special place in my heart and on my bookshelf and since his death I often sat at my bed and stared at my collection of Terry Pratchett books and thought about nothing particular. I know that he will be missed by many readers but I'm glad that he will live on in his great books.


I really hope that DEATH let you ride Binky over to the other side Sir Terry!

"The commander went, as they say in Ankh-Morpork, totally Librarian on them."
Terry Pratchett, Raising Steam
Posted by Karin at 7:00 AM