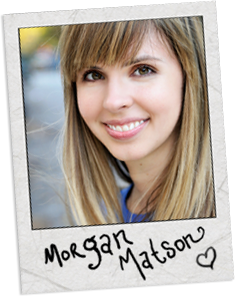 Morgan Matson was born in 1981 and grew up in New York City and Greenwich, Connecticut. She attended Occidental College in Los Angeles but halfway though a theater degree, she started working in the children's department of Vroman's Bookstore and fell in love with YA literature.
Following college graduation (and the proud bearer of an incredibly useful theater/English degree) she moved back East to attend the New School, where she received her M.F.A in Writing for Children.
Amy & Roger's Epic Detour, inspired by Morgan's three cross-country road trips, was published in May 2010. It was named an ALA Top Ten Best Book, a PW "Flying Start" book, and was shortlisted for the Waterstone's Book Prize. It has since been published in five different languages and six different countries.
In the meantime, Morgan moved back to California, went back to school again and in 2011 received an M.F.A. in Screenwriting from the University of Southern California.
Her second book, Second Chance Summer, will be released in May 2012 and draws largely on her experiences spending summers growing up in the Pocono Mountains of Pennsylvania.
Morgan currently lives in Los Angeles, though she loves to travel and does it whenever she can. She is currently writing another book, to be published in 2014.
source: Morgan’s Homepage

First sentences:
I sat on the front steps of my house and watched the beige Subaru station wagon swing too quickly around the cul-de-sac.

Summary:
Amy Curry is not looking forward to her summer. Her mother decided to move across the country and now it's Amy's responsibility to get their car from California to Connecticut. But since her father died in a car accident, she isn't ready to get behind the wheel. Enter Roger. An old family friend, he also has to make the cross-country trip. . .and has plenty of baggage of his own. But as they drive, Amy finds that the people you least expected may turn out to be the ones you need the most—and that sometimes you have to get lost in order to find your way home.
source: Morgan’s Homepage

My opinion:
I Love Road Trips!
I love taking them, I love reading about them, I love dreaming about them and this book combines at least the last two. The book tells the story of Amy and Roger’s incredible road trip through the United States in Amy’s mum’s car. The book contains the story of the actual road trip, of the events leading to this trip and is also filled with scraps, pictures and memorabilia.
Amy & Roger’s road trip is really epic and takes you from California to Connecticut with some detours you just can’t expect – geographically as well as emotionally.

This is another book you can put on your “Travel books I have to read” list. If you don’t have a list like that go get it. There are too many awesome travel inspired books out there to miss just one.

I was really sucked into the story and loved every minute of the trip I took with Amy and Roger. There are not enough words to describe how much I loved this read and I am really sorry it took me so long to buy and read it. Morgan’s next book is a sure buy for me.

Last but not least and incredible book trailer:
Posted by Karin at 8:00 AM